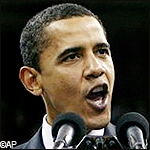 Washington: President-elect Barack Obama today voiced fear that Mumbai-type attacks can be replicated by terrorists in other parts of the world, including the US and said his administration will focus on putting more pressure on al-Qaeda.

Asked about 26/11 terror strikes in an interview to ABC News, Obama said the “danger is always there” of a Mumbai-type attack on an American city.

“When you see what happened in Mumbai, that potentially points to a new strategy, not simply suicide bombings but you have commandos taking over…,” he said.

“I think you have to anticipate that having seen the mayhem that was created in Mumbai, that there are going to be potential copycats or other terrorist organisations that think this is something that they can replicate,” Obama said.

At a Congressional hearing on Mumbai attack this week, top US intelligence and police officials had expressed similar fears and said that this makes all the more necessary to ensure that those responsible for such an attack are brought to justice, given that US cities are always on top of the hit list of al-Qaeda and other terrorist groups.

“That has to be one of our primary areas of focus when it comes to our international security.”

MSN Special
Terror as it unveiled in Mumbai